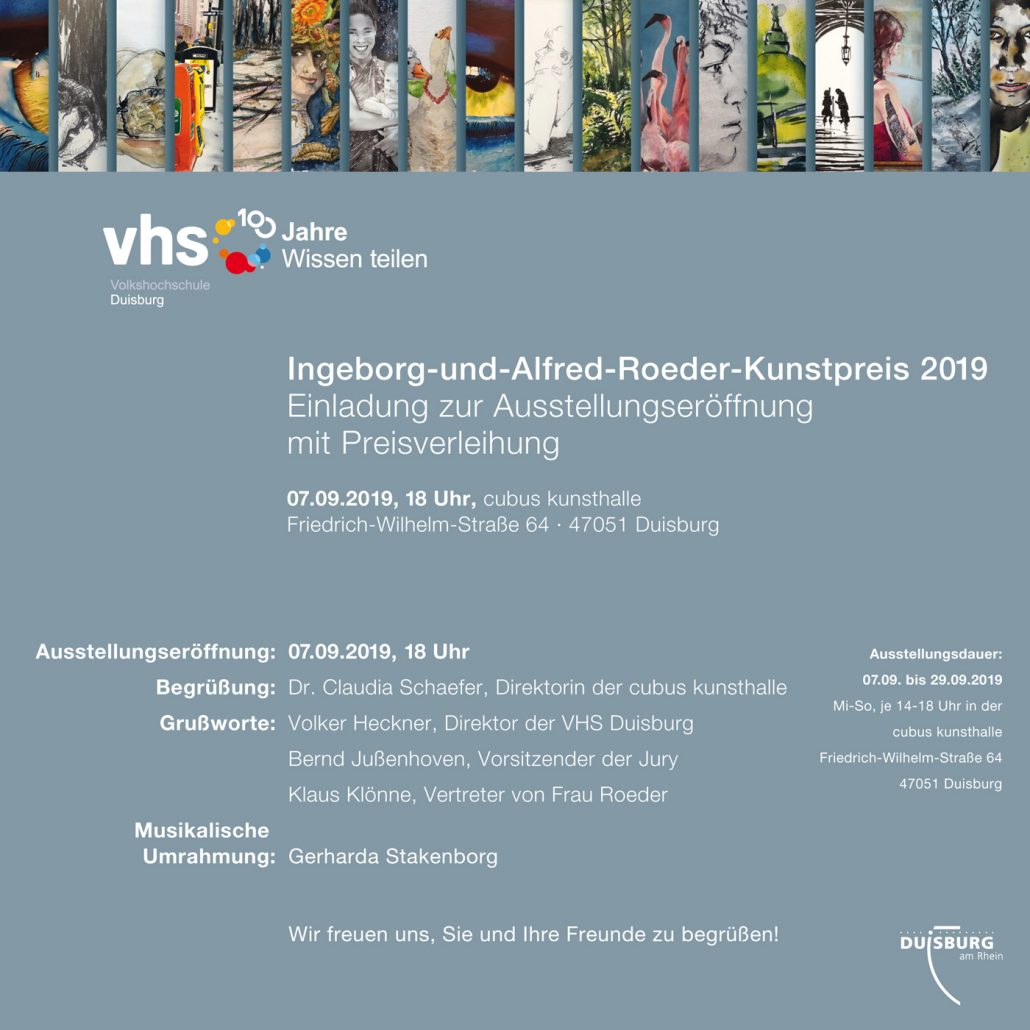 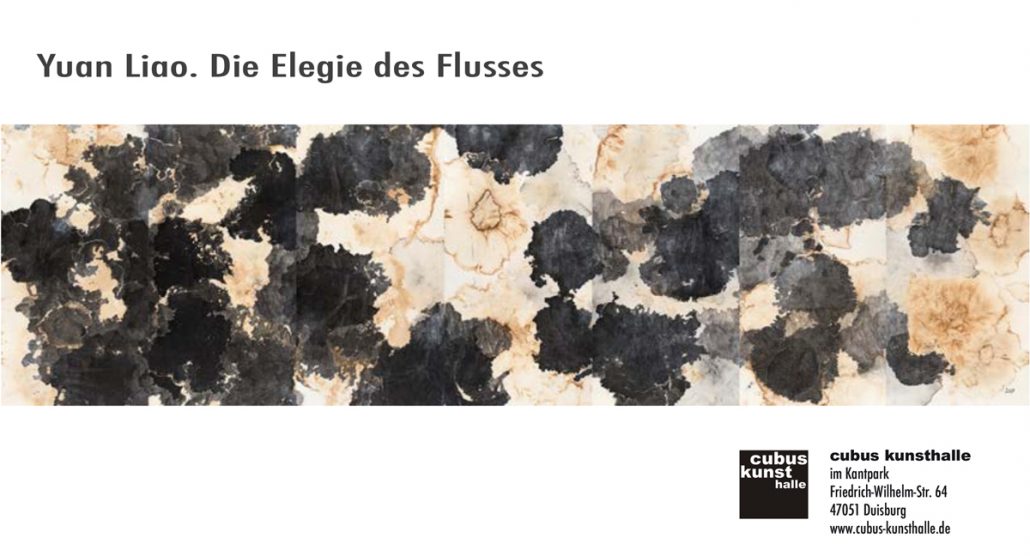 The Elegy of the River

Liao Yuan was born in the southwest of China. In 1990’s, He came through thousands miles from Sichuan to Shanghai. After years of hard working. He has gained remarkable achievements. Now, he is not only the editor-in-chief of the most important art magazine in China, a profoundly educated art theorist, but also a pioneering artist in Chinese contemporary art scene. Although he has done so many different jobs, there is always an inextricable connection to art, and he has never stopped his artistic creation.

Liao yuan has studied Chinese calligraphy and painting since an early age. He received systematic art education in the college and has been using ink such traditional medium to create art for nearly 30 years. Such education background and experiences have made him well aware of the characteristics of water and ink in painting. With his long-term creative practice, he has formed his unique creative approach.

Liao Yuan is not a religious believer, but he firmly believes that everything has its spirit, and artistic creation dwells in the spiritual world. It has a complex and unknown trajectory. Time and space, the universe and life, fate and movement are the theme of his works. Unknown, consciousness, flowing transformed to become his painting elements in motion. All of these are the sources of Liao Yuan’s art.

In recent years, “The Elegy of the River” has become the main line of Liao Yuan’s artistic creation. Ancient China was centered in the Yellow River, and the Yellow River civilization had a great influence to the world. The social and cultural fields of Modern China has experienced from flourishing to declining, which is presented as the situation of “Western Learning spreading to the East”. The creation of “The Elegy of the River” series is Liao Yuan’s attachment and reflection on ancient Chinese civilization, and also the exploration and questioning of the relationship between the individual and the world.

The series paintings “River Map” is an important part of “The Elegy of the River.” In ancient China, the river map was a kind of mysterious knowledge that communicated with the heaven. It was “simplistic and profound.” The paintings in “River map” series are like the hexagram of “Embarrassment” of I Ching., which combines different factors such as time, space and cultural concepts with a mysterious movement of heaven and earth. All the factors finally merge into the rich river map and constitutes a form that has the meaning of travelling through time and space. Here, Liao Yuan seems to be fascinated by the exploration of the unknown. The dots in the paintings are regularly arranged and rotated like “particles”, which created a vast universe belonging to themselves. In the end, “River map” turns uncertain things into certainty, presents a sense of movement, and finds interesting and fresh things from the unknown, which is exactly what Liao yuan is searching for.

“The Appearances of skins” is another theme of Liao Yuan’s recent artwork. The lines are meticulous, neat and rich. Very detailed depiction and concise images form the unity of this series of paintings. The details with chaos and the accumulation of ink brushstrokes construct a solid fulcrum inside the picture. The simplistic composition contrasts with the complicated ink marks in the picture. Liao Yuan abstracts everything in a symbolic language. He removes the excessive impurities in the space and uses a symbolic painting language to release a highly concentrated and condensed image. “The Appearances of skins” series establishes his overall painting concept and style.

Liao Yuan’s “The Elegy of the River” are divided into two categories, one uses the form of “multiple”: ink accumulation and complexity, and another is in simplistic “less” pattern. The former is like a map or cartography; the latter is like the sky and the constellations. The former category is painted in dark ink and the latter category is painted in light tone. The images of the two same as Yin and Yang, which symbolize the beginning of the universe: Yin and Yang/ heaven and earth constitutes the mysterious world.

Liao Yuan’s painting manners are uncertain and fluid. They are the paintings about the ontology of painting. He is good at using ink, sometimes mix with tea and mineral pigments, to present many unexpected changes and uncertainties on rice paper.

First of all, he insisted on using materials such as rice paper, ink, tea, mineral pigment and other Chinese cultural attributes. He strives to dig out the physical and special cultural characteristics of traditional Chinese painting, so that the picture could maintain the cultural extension: the materials with oriental characteristics were reconstructed, spread and generated. Deeply nourished by traditional Chinese culture, he explores a grand spiritual theme that is constructed in detail. They are the appearance of micro and macro alteration. The re-definition of the extraordinary material intervention and generation, in the process of conflict and integration, has made a theological extension-the illusion of space and time, the complex psychological folds that are unpredictable for the future, this is the “infinite” in Chinese.

Secondly, in Liao yuan’s series paintings, we can see his profound understanding of the “quality” of the painting language. He has a habit of collecting Neolithic Chinese pottery, Wei and Jin Dynasties’ stone carvings, and a large number of ancient inscriptions and books. This becomes his inexhaustible spiritual nourishment. The styles and tastes of Chinese calligraphy make him seem to have the mysterious power at every point and line in his paintings. Meantime, in every painting’s unique time and space, each line is like a scratch of endless time, which symbolizes the moment and eternity: the creation of everything between heaven and earth which beyond time and space.

The view of “The Elegy of the River” just like “looking at the sky from the plateau, it is so quiet.” In the land of Chinese civilization with the river as its core, and on the rich soil of the Yellow River Basin, Liao yuan’s art revolves around the themes of universe, time, life, destiny, and movement, which allows the audiences to enter a state of enlightenment and meditation, to stand in the double emptiness of time and space, to feel the ubiquitous meditation between heaven and earth.

Like traditional Chines literati, Liao Yuan pays great attention to self-cultivation and emphasizes the significance of individuality in cultural practice, but he is not a cultural nationalist. He is a contemporary person who pursues universal values. In his exploration of the uniqueness of Chinese modern art, he plays the role of an “inheritor”, and actively incorporates global art with an open mind. His transformation of Chinese traditional culture is a positive response to globalization. Liao Yuan’s “The Elegy of the River” draws nutrients and wisdom from Chinese tradition to achieve a transcendental state of “No question whether the East or the West”. His constant reaffirmation and transformation of Chinese traditional culture is not only a response to the question of where ancient Chinese civilization should go after encountering modern time, but also an active participation in global multiculturalism. Adhering to the Chinese traditional concept of “Writings are for Conveying Truth”, he firmly believes that no matter what kind of art, artwork should express some kind of spiritual truth not just a superficial form. He hopes that the seeds of Chinese traditional culture will bear fruits of contemporary significance in today’s globalization.

In short, as a very important explorer in the field of Chinese contemporary art scene, Liao Yuan is reconstructing the aesthetic mechanism of Chinese painting with his rich artistic creation and opening up a path for us to recognize and understand Chinese traditional culture. 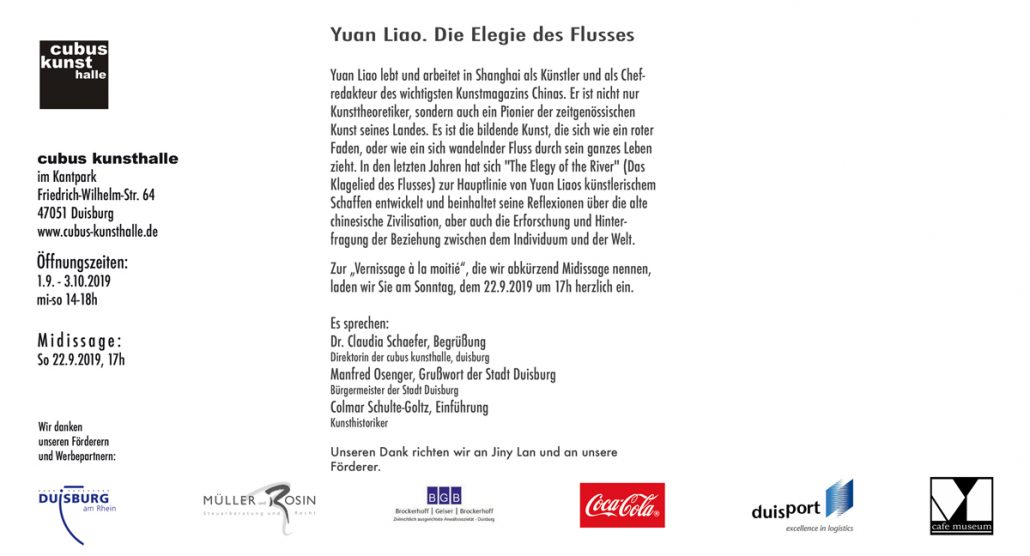